This house was the cover feature of The Design Guide 2016 #1. The excerpt that follows was written by the architect, Dom Glamuzina…

This new family house in Cox’s Bay is surrounded by an eclectic collection of suburban houses: villas and bungalows frame a pocket of state houses and duplexes while, further down the street, contemporary newcomers display various degrees of assimilation into their context.

This project provided an opportunity to reclaim the front yard as a living space by making a denser floor plan at the back of the site, with more compact and private urban courts within the new footprint. It borrows concepts from the existing context, such as repurposing historical motifs, but crosses them with a contemporary plan to stitch the site together and create more usable space. 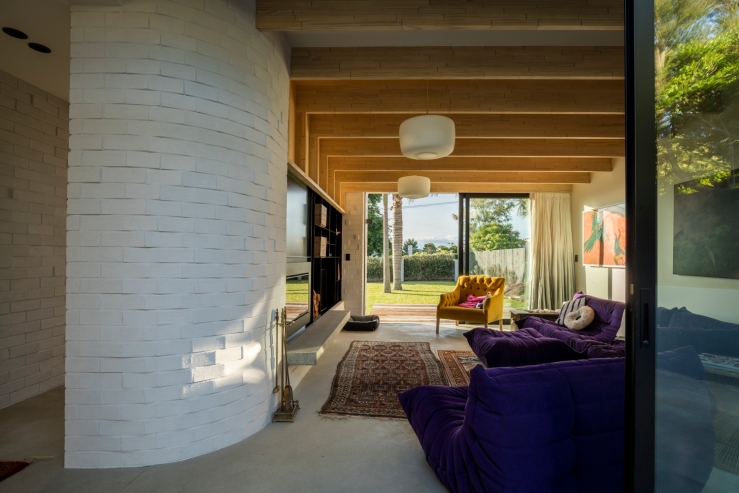 The brief went beyond the typical three-bedroom house to include an office, a pottery studio, a children’s playroom, and a mezzanine above the master bedroom

Flood plains and aggressive southern boundary height controls dictated a single-storey dwelling. So instead of going up, we decided to create an expansive single-level house that could maximise its connection with the ground. The design borrows the original state house location, but instead of disconnecting from the front yard – as the old house on the site did – we have opened the new house onto it, and raised the lawn so that the site can be fully utilised.

The front of the house is almost villa-like, with a deep-set porch and central entry flanked by the living room and the office. From the entrance, you are led into a large, central corridor, which spans the length of the house and links a progression of discrete living spaces. The playroom is located centrally between the two main living spaces, and has a large sliding door that merges the room with the corridor. An alcove opposite has a timber seat that forms a useful waiting or observation point in the corridor. The alcove and playroom look across an ‘urban court’, which separates the street-facing living room from the kitchen and dining room, which are central in the plan. This layout, with its central courtyard and hallway, enables rooms to be separate but still interconnected, and provides acoustic separation yet allows the parents to oversee children’s play.

At the rear of the site, two bedrooms open onto a small south-eastern courtyard; continuing the circular loop through the plan, a small pottery studio and third bedroom lead to a flight of steps down to a single-car garage to arrive again at the front yard. A contingency is offered by the plan, with its series of extracurricular rooms that can absorb other ways of living as the need arises. And perhaps, under future planning rules, the house will expand upwards to become part of a denser, taller neighbourhood.

Like the placement and form, materials are also a blend of old and new. The exterior cladding makes reference to the old state house, with articulated bagged brickwork atop a continuous plastered base. But instead of the steep gabled roof of the 1940s ‘staties’, a low-pitched roof signals its modernity and creates an understated, almost humble presence in the street. Inside, materials are generally robust and textural – utilitarian at times, but still with pockets of crafted detail.

Concrete floors are used throughout to provide a softened industrial aesthetic and for thermal mass, with underfloor heating for the coldest winter days. The timber structure is exposed to define the main living spaces, and to provide a softer material for acoustic damping.

As an assembly of reworked suburban elements, this house is a contemporary interpretation of suburban living. It shows its colours through the functional front yard and low fence, but maximises habitable indoor space with the compact plan and a progression of courtyards that join the house to the site boundaries. It seeks to rediscover a sense of neighbourliness and neighbourhood by opening to the street, minimising the car parking and making the front yard truly habitable.

The design borrows the original state house location and scale, but instead of disconnecting from the front yard, the new house opens onto it. 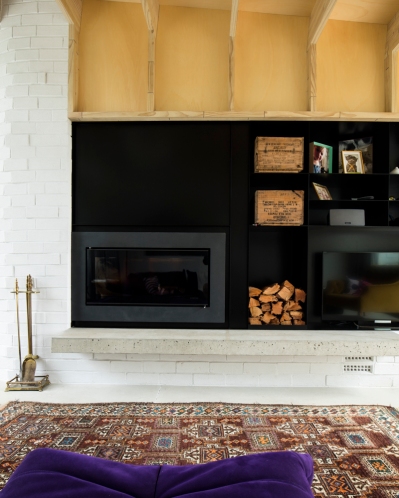 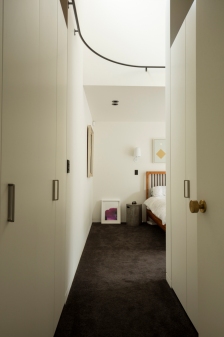 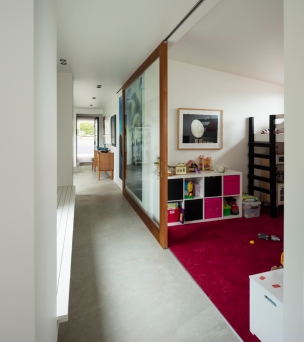